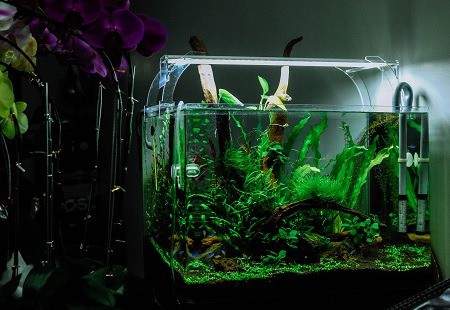 Algae is essential for any water body, there is no denying it. It is considered a healthy environment if we have some in our fish tank. The problem arises when there are too many algae. And if we are not careful, soon, the algae will invade your tank.

But don’t stress! There are several solutions to it. And among others, the biological method, i.e., Removing algae with algae eater can be a perfect solution to your problem. This is a fascinating topic, especially for those who are thinking about decorating an aquarium.

This article does not aim to define the types of algae and the reasons for their appearance, but rather a short introduction to the fish that feed on algae, helping to some extent in their control. In the next few paragraphs, we are going to talk about 21 best algae eaters for your freshwater tank. Since not all are beneficial and that is why choosing some fish is very important.

Contents show
Algae Eaters: Unique and Like No Others
21 best algae eaters for your freshwater tank:

Do not put all the algae eaters in the same bag. Indeed, each species has its role according to its morphology and its diet. Some species eat algae from the bottom, other windows, etc. These algivorous animals must be chosen according to the volume of the aquarium but also the decor and the other fish that live there.

Algae eaters have the distinction of not having scales, but rather bony plaques forming hard skin. Their pectoral fins are used to rest on the ground, and their downward-facing mouth is often provided with barbs or thorns. This mouth is also convenient to clean a surface of the algae that have settled there or to help a fish to get rid of its parasites that stick to its skin.

Algae eaters keep the water healthy. There are different types of algae eaters and various types of algae. Algae are a daily problem in freshwater. Conditions such as lack of sun, poor quality water, and also many plants create algae in clean water. Freshwater creatures like shrimp, Otocinclus, and snails eat algae. Not all algae eaters are compatible with other fish. Food garbage can make seaweed eaters aggressive.

Here is a list of some of the best algae eater for you.

The trumpet snail is one of the most widespread snails among aquarium hobbyists. It is both loved and hated by all of us who have aquariums. The Malaysian trumpet snail is nocturnal and cleans algae from dead plants. It eats the leftover food from our fish, the algae, and removes the substrate from the bottom of our aquarium.

This snail also eats leftovers from other freshwater fish. The zebra snail is also an algae eater that breeds like shrimp in brackish water. The zebra snail can overtake a pond, lake, river, and an aquarium, which is a must to remove babies as soon as possible.

There are dozens of different species of Ancistrus, but the most common is Ancistrus triradiatus, both in its natural form and in its albino or long-finned variety. It is a primarily herbivorous fish, which will tirelessly remove any algae growth in the aquarium. In addition to algae, it will gladly accept almost any commercial bottom fish food (pleco stick for example since it is omnivorous and a small percentage of its diet in nature is of animal origin)

“Plecos” is the definition of fish that have their mouth in the form of a suction cup. In general, they eat brown and green algae, interesting to include fresh foods like cucumber, potatoes, and peas in your diet. Depending on the species, you can grow a lot and uproot plants. Usually, it is always ideal to have a trunk in the tank to satisfy your need for cellulose.

Significant algae eater, in general, is less likely to eat algae after being an adult. It can become aggressive when it reaches sexual maturity and usually does not tolerate the presence of another CAE in the same space; very active fish may come to attack mucus of other fish if the food is mediocre.

The SAE (Crossocheilus siamensis) is almost white in tone and is divided by a black line from its mouth to the end of the tail. Crossocheilus obonglus is quite similar, but the black line does not go beyond the caudal fin. Another similar is the flying fox (Epalzeorhynchos kalopterus), which has the same black range where a yellow one accompanies it. Chinese algae eaters are easy to distinguish, as they have a suction cup-shaped mouth. Considered one of the best algae eaters, including filamentous, brown and green; often confused with other algae eaters.

Fish with a strong personality, tend to be territorial with other fish and cannot tolerate another specimen of the same species in the same space. It is a regular algae eater that is usually spread over plants, logs, and glass. Other varieties of Labeos, such as the popular Frenatus and Negro, also perform the same function.

Regular algae eater in general, it is a very active fish. Unlike CAE and SAE, they tend to be more tolerant of the presence of other specimens of the same species. Mostly found in southeast Asia. They can be 13 cm on average.

They are excellent algae eaters. They are usually “pinching” the plants in search of algae, but without damaging them. Fish widely used during the aquarium cycling (incorrectly) to combat algae and are avid consumers, as long as you do not feed them initially. But be very careful not to let them starve, observation is the critical point.

Regular algae eater, mainly green. Their diet should be supplemented with cucumbers, zucchinis, and peas. Sensitive to water quality, specifically Farlowella gracilis will become too large for planted aquariums, damaging plants, other species do not grow as much.

Considered one of the best algae eaters, ideal for African cichlid tanks; this fish is difficult to maintain and very demanding, not suitable for beginners. Besides, they are rarely found for sale in stores.

Regular algae eater in general; very robust fish. They can adapt quickly to different types of water. The size is very suitable for medium fish tanks as they are only 8 cm in general.

Although few define it as a blackfish, they give great help in fighting algae in general. They usually pinch some plants but do not harm the plant. Although they adapt quickly to acid pH, they will not show all their colors at this ph. Very small in size (5cm) with beautiful rainbow color.

There are many genera of this algae eating fish for pond, among the most common in Brazil is the genus Pomacea. Pomacea bridgesi is one of the few that can be kept in planted tanks without causing significant damage to plants. Good-potters, eat in addition to algae, dead leaves, food scraps, and dead fish, among others. Among the most popular are also Pomacea canaliculata and Pomacea paludosa, some plants eat these two.

It is a calm fish but somewhat territorial with other males of the same species. Females may coexist well in groups, but males will tend to protect “their zone” or “territory.” It feeds on algae, which will tirelessly search the aquarium.

It is crucial never to introduce gobies in freshly assembled or immature aquariums since their diet is algae and biofilm.

It is a quiet algae eating shrimp that we can keep with fish that are not excessively large or aggressive. She is shy at first but will eventually graze all over the aquarium. Due to their size, aquariums of about 30 liters forward are recommended.

Caridina multidentata is an excellent algae eater and feeds on green filamentous algae as well as brown algae. It also feeds on beard algae, but when it has little development. They are great algae eaters, although they will accept commercial food, spirulina, or vegetables very well.

Besides its qualities as an algae eater, Caridina japonica also consumes the pieces of dead plants from the aquarium and the remains of abandoned food, even in the most challenging places to access.

Body covered with bony plates and a ventral suction cup. Their broad, bristled nose distinguishes them as a bushy mustache. Charmed to eat the green dots and algae that come out on the crystals and decoration material. Maximum growth size: unlike the Plecostomus, the Ancistrus grows only about 8-10 cm.

Babaulti prawns come in a variety of colors and some striped types. They are relatively easy to care for and are more resistant to things that are a little out of place. They love to eat dead plants and make a great addition to a planted tank.

It is a highly recommended fish for a community aquarium because it hardly interacts with other species. It feeds on algae, which will tirelessly search the aquarium. He likes green point algae attached to stones and crystals, significantly reducing them and even making them disappear. He dares with the algae of the Anubias and subjects them to a proper punishment. Although in this sense I like the results of our Semiconical neritins more, which are spectacular.

What do algae eaters eat?

The aquarium does not contain all the nutrients found in natural environments. This is why it is necessary to provide the right specific foods for algae eaters. This food exists in the form of tablets or even granules.

The food intake is very important because the algae eaters can quickly find themselves lacking in nutrients. Do not also hesitate to give them live or frozen food such as red worms or Artemia, because the food chain must continue! You will find it all in a specialist store.

However, be very careful because algae eaters are very susceptible to disease. However, a single sick fish can contaminate the entire aquarium, and you will lose all your fish.

Experienced aquarists believe that without algae eaters, they cannot create favorable conditions for the inhabitants of the pond. They create the necessary balance of vegetation, prevent its excessive development.

Representatives of algae eaters do not require complex care but must strictly respect the size of the population. For example, inexperienced owners must be aware that the Siamese algae love to eat musk.

Not every aquarist knows that in addition to fish, snails, natural or artificial vegetation, and decorations, every underwater kingdom must live on fish, algae. Any aquarium is susceptible to algae. The fish and invertebrates mentioned in this article can be added to the tank to help in their control, but never as a definitive solution for complete eradication. They are supporting beings in algae control. The best thing to do is to control them through prevention, combined with the help of these animals.