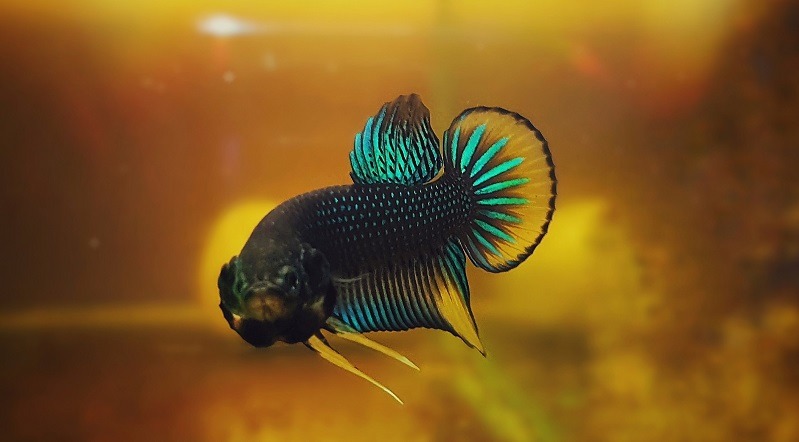 Is your betta fish being too inactive these days, in fact, hardly moving? We know, you must be feeling really worried about whether it’s okay. We’re not going to lie, but this can be a symptom of some ailment. But before deep into the cause, you need to find out if your betta fish isn’t moving at all even if it wants to; as if it’s paralyzed.

But wait, can betta fish become paralyzed in the first place?

Well, there is no clear evidence that proves betta fishes go through paralysis. Most often, the lack of movement in them takes place due to illness, lack of oxygen, or simply if they’re sleeping or resting. However, if it carries on for more than a day, this isn’t something normal and requires a vet consultation.

Just keep reading to know more about the causes or unusual habits of betta fish that make them look paralyzed sometimes.

How to Know If Your Betta Fish is Paralyzed?

Though betta fish might not get paralyzed like humans do by some brain injury or neural disorder, they can get partially disabled due to other injuries or illnesses. You can note it by observing whether your fish is moving the same way it used to or if there is a stiffness in any of its voluntary parts.

Such as, if the fish swim only using its pectoral fin and is unable to move its tail or vice versa. This might be indicative of some physical issues causing partial paralysis or disability within the betta.

What Does It Mean If Your Betta Fish Isn’t Moving?

Betta fish, not moving, isn’t always something to sweat about. It is an animal, a living organism. It requires rest for functioning. So, it might simply be resting or taking a nap. And it still isn’t anything to worry about if the betta isn’t moving for hours, since betta fishes tend to sleep for 12 to 14 hours. Hence, it’s very likely the reason behind your betta fish not moving.

However, if you closely observe your betta and find it to not move for days, then it is an alarming sign. Check whether it’s breathing and consult a vet or someone with good experience and knowledge about taking care of a betta fish immediately.

Why Your Betta Fish isn’t Active?

If you find your betta fish quite inactive for some days, that is, it doesn’t move or swim in its usual way or lays down on the bottom or side of the tank depressingly, you need to check on a couple of things.

Betta fish is a quite active variety of tank fish. It is fond of continuous and frequent movements. However, the lack of such movement is a sign of the fish not being too well. This can be due to poor water quality and inappropriate temperatures since betta fishes are quite sensitive to the quality of water. Besides, temperature lower than preferred for betta makes them sluggish.

Lack of adequate amount of oxygen can be a good reason behind such behavior too. You will be able to figure out more precisely by knowing exactly how your betta fish is acting while it is being active. Such as the following.

Why Your Betta Fish is Sideways but Still Alive?

Betta fishes usually lay sideways when they are taking a nap. However, if you find your betta in the same position for more than 15 hours, there something might have gone wrong. This can be a sign of a disease called Swim Bladder Disorder.

Why Your Betta Fish Isn’t Able to Swim?

There is a thin line of difference between your fish not swimming and your fish not being able to swim. The first simply means your fish doesn’t feel like swimming or chooses not to swim while it can whereas the second one indicates your fish is unable no matter how much it tries.

You will be able to figure out your fish’s case after observing it, Usually, active fishes like betta not being able to swim, is a clear sign of illness.

Why Your Betta Fish is Lying at the Bottom of the Tank?

Why Your Betta Fish is Staying in the Corner?

Some of the wild types of betta fish have this behavior to remain in the corner of the tank. This is because they find the corner the safest in the tank. It is just a reflex of their habit of hiding out in not-so-open spaces in order to protect themselves from being the prey to bigger fishes.

How to Get Your Betta Fish to Move?

One of the initial things you can try to make your inactive betta fish move is by pouring some warm water inside the tank and letting the fish to adapt the rising temperature and move gradually.

This is pretty effective if your fish is inactive due to lower water temperatures. However, remember to put slightly warm water, not hot water, to balance out the temperature inside the tank.

How Does a Betta Fish Take Nap?

One of the primary reasons behind the betta fish getting still for hours is that it is most probably taking a nap. However, fishes don’t sleep like humans with their eyes closed.

Since, they don’t have eyelids, they sleep in different positions, such as, with their head down, vertically, or sideways with their eyes open. This often keeps beginners wondering if they’re paralyzed. But they aren’t.

Can Betta Fish Get Traumatized?

How to Know if Your Betta Fish is in Shock?

When your betta fish is traumatized or shocked due to pH or temperature change, it will initially react roughly by darting, thrashing, gasping, swimming near to the water and surface, and trying to jump out of it. But gradually, it might get low and inactive taking its position mostly on the bottom of the tank.

Can a Beta Fish Feel Lonely?

Bettas are territorial in nature. They are fond of fighting with other fishes including their own kind. So, they aren’t supposed to get lonely. However, they might get bored due to the lack of recreation in the tank.

A betta fish acting as if it is paralyzed is normal as long as it is limited to a few hours to half of the day. However, if this condition prevails for more than a day or two at a stretch, it might need a quick change in its water environment or treatment from an experienced vet.

Though there are very few chances, it’s a case of paralysis. After all, how can betta fish become paralyzed with such small brain activity?