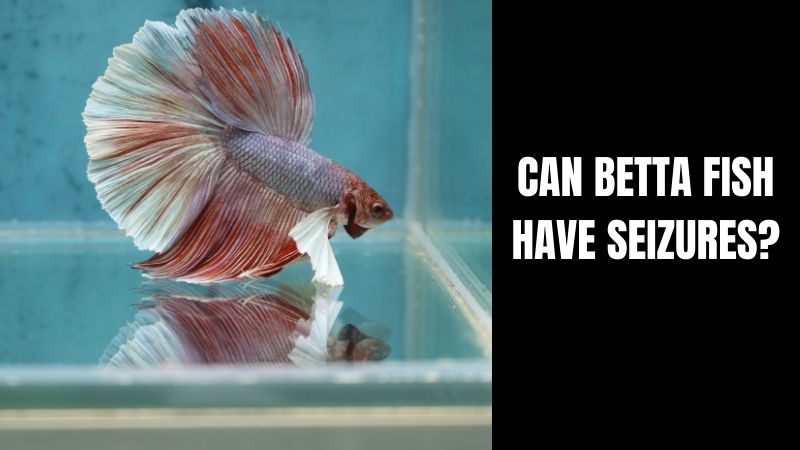 Do you notice your betta fish act as if it is having seizures? What if it actually is? But the question that should instantly cross your mind right that moment is, can betta fish have seizures?

Yes. betta fish can have seizures. Not only in betta fish, but seizures are also a phenomenon that might take place in other species of fish. And to recover from seizures, quick actions are required to be taken to save the fish.

In this article, we will help you reach the root of the problem you’re facing with your betta fish and further discuss the way of solving as well as preventing it. Let’s get going.

Can Your Betta Fish Have Seizures or Epilepsies?

There are few signs through which you will be able to clearly identify if your betta fish is having seizures. The reason behind the seizures in fish is usually due to environmental or temperature shock or any other water factors that are unsuitable for the fish.

Are Betta Fish Seizures Similar to Human Ones?

Even though, there is a huge gap of species between humans and fishes, the signs of seizures in fishes like betta fish are quite similar to the human ones. It takes place as a constant shaking movement and breathing difficulty in both cases.

However, the reason behind the seizure taking place within the body of the betta fish might be slightly different than that of humans. Seizures in humans take place due to the effect of a pre-existing or advancing disease, fever, imbalanced blood sugar level, and bad living habits.

However, in fishes, the leading causes behind seizures are either extremity or deficiency in its surrounding tank environment. This can be due to poor water quality, extreme temperature, loud noises, oxygen deficiency, and much more.

What are the Signs of Seizures in Betta Fish?

Apart from the rapid shaking or twitching movement, several other signs might indicate a seizure or the state before the onset of seizure in your betta. If you notice some of such signs in your fish, know that something is bothering it and needs to be solved immediately.

Many before, after, or while having a seizure, the fish tends to lose its balance and tilts to one side or starts to drown at the bottom as if it is fainting. You will see your fish still breathing but it will have less control over its smooth movement.

Many times, during the time of a seizure or the time around having a seizure, the fish loses its appetite. So, even if it is the feeding time, you won’t find your fish showing interest in food. Rather, it will seem distracted and distressed.

Due to the effect of seizures, often the skin or scales of the fish seems to get paler in color. It is a common sign indicating physical issues within the fish. Hence, even when your fish is not having seizures or any other symptoms of it, pale skin is an alarming sign.

The action of seizure or shaking rapidly losing control is usually followed by rapid movement when it is about to happen. Though territorial fishes like betta fish are fond of moving rapidly, so this sign might be hard to judge. But generally, their movement seems abnormal before the seizure.

One of the signs of the fish losing its balance is when the fish starts swimming in a circular motion. The fishes try to gain control over their body while it gradually loses control. And so, rather than immediately falling downwards, they revolve circularly in the center of the tank.

At times, you will genuinely feel your fish is facing breathing difficulties. Because it is kind of similar to what happens in humans. The fish seems to breathe rapidly and largely, as if, it is not getting enough oxygen to breathe. This often leads to seizures as well.

What are the Causes of Seizures in Betta Fish?

The causes of seizures in betta fish are not always traceable or preventable. However, they are mostly related to the environment and water conditions of the tank and its surroundings. Below are the few most common causes behind the development of seizures within betta fish.

Fishes like betta are sensitive to extremely loud noises. Loud noises create a trauma inside them that often lead to seizures or many times even stroke. And so, it is ideal to place the fishes somewhere calm to save them from shocks of loud noises.

Just like loud noises, bright lights also make traumatic impacts on the fish. Fishes often lose their consciousness and balance in bright light. Especially, during the nighttime. Because in the natural environment, the underwater is dark at night. So, constant 24 hours of bright light leads to seizures in the fish.

Many times, bacterial or fungal infections like Ich or Velvet also cause seizures along with several other symptoms. So, if you’re already known about any such medical conditions of your fish, this can be a side effect of that. However, if not, then it is better to check if your fish has any such medical condition. Especially, if seizures start to take place often in them.

The lack of an adequate amount of oxygen might be the cause of seizures and loss of balance in your fish. Because when there is oxygen deficiency in water, the fishes start to feel suffocated and lose their balance.

The water condition you’re offering your pet betta to live in is the most vital part of your care routine for the fish. Any disturbance or degradation of the water quality and the pH leads to several disorders and traumas in your fish. Among these, one is seizures.

The maintenance of optimal temperature suitable for a fish as sensitive as betta is extremely important. Betta fishes require a water temperature of 75 to 80 degrees of Fahrenheit. Temperature slightly below or above this range won’t make a huge difference. However, a temperature that is much higher or lower than this optimal level might cause such casualties as seizures.

How to Calm Down Your Betta Fish from a Seizure?

To calm your betta fish down from a seizure, there are some immediate actions you need to take right after your fish seems to go through the condition so that it doesn’t worsen. The actions are relatable to the reasons why your betta fish might have got the seizure. Here’s what you should do.

How to Prevent Betta Fish from Getting Seizures?

Seizures are quite a severe condition for the fish. A fish owner should always try to avoid such circumstances. And for that, here are some dos and don’ts one can follow.

-Use an aquarium heater with a thermostat for automatic temperature adjustment as per requirement.

-Monitor the health of the betta fish.

-Avoid excessively bright light both during the daytime and night

Can a Betta Fish Die from Seizure?

It’s sad to hear, but a betta fish can die from seizures if proper measures are not taken in real-time. Many times, even if the seizures stop, the fish gets much weaker and gradually dies within a few days.

Moreover, many times, when the fish is at the very end of its lifespan and is about to die, seizures might take place as a precondition before its normal death. And so, the age of your betta fish is also a factor to be considered behind seizures to take place.

Now that you know, how can betta fish have seizures, make sure you take steps to prevent it from happening. However, if you realized that your fish went through this condition where your doubt came from, consult a vet immediately for necessary treatment.