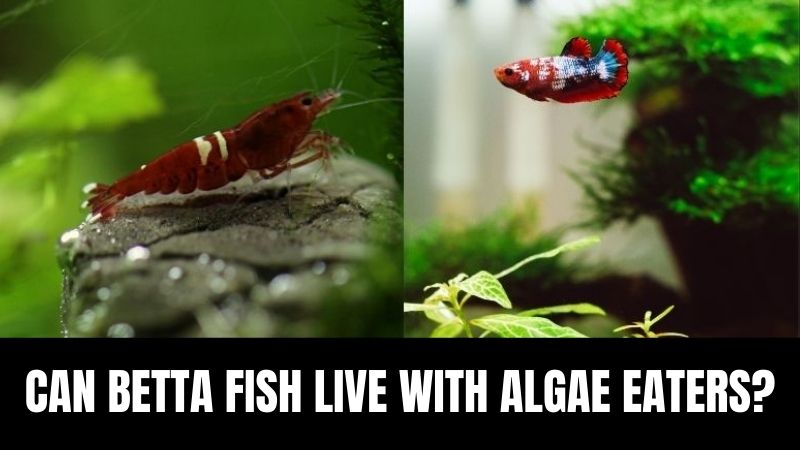 Do Betta Fish and Algae Eaters Get Along?

First thing first, you need to research the habitat and water conditions of your betta fish and match it with the kind of algae eater you want to get. Because you won’t be able to make two different water environments in one tank.

And so, choose an algae eater with somewhat the same sets of preferences as your betta. That will also increase the chance of compatibility in them. Also, betta fishes are generally aggressive irrespective of their kind. But algae eaters can be both peaceful and aggressive, depending on their specific kind.

Since betta fish is aggressive and fond of fighting, it is better to have a small group of peaceful algae eaters sharing the tank with them. Or else, your tank will turn into a war zone of fish, which you definitely don’t want.

Betta fish is usually generous to some specific types of algae eaters. By the end of this article, we have enlisted some of the best algae eaters that get along with betta fish and can live peacefully together in a tank. Make sure to check it out.

How to Set Up a Tank for Betta Fish and Algae Eaters?

Betta fishes and most of the algae eaters that are observed to be compatible with betta fish comparatively have similar requirements of water condition and temperature. Both betta fish and algae eaters are fond of space to swim. And so, it would be wiser to go for a tank with a capacity of at least 10 gallons. It should be more depending on the number of algae eaters.

Usually, the ideal temperature of water for betta fish and the right algae type should be somewhere between 76 to 78 degrees of Fahrenheit (24.5 to 25.5 degrees of Celsius). And the pH levels should be approximately 6.5 to 8.

Neither betta nor algae eater is hardy in nature. They are comparatively flexible in terms of water hardness. Moreover, betta fish and a few kinds of Siamese algae eaters are jumpers in nature. And so, the lid of the tank should be tight enough to resist them.

How Many Algae Eaters Can be Kept with a Betta?

It depends on the type and size of both the betta and the algae eater. Just remember, that you should have enough room in your tank for the fishes to have their personal space for swimming. Because both of these fishes get uncomfortable when they don’t get enough space for swimming due to over-population and this further creates stress inside the tank.

However, it is preferred to pair a betta fish with 5 to 6 algae eaters in a 15 to 20 gallons tank. Because if you keep one or two algae eaters in a betta tank, they might have a less chance of survival from the aggression of betta.

What Other Fish Can Live Together with Betta Fish and Algae Eaters?

The only key factor that matters while choosing tankmates for bettas and algae eaters is the compatibility of the fish with the betta. Algae eaters do not play a crucial role here because they aren’t the problem creator. It’s the betta you need to be cautious about.

There are two important things that can help you choose the right tankmates for betta fish and algae eaters. One is selecting fishes that are peaceful but active. Because even if the betta tries to chase the fish, it is important for them to not fight back, rather avoid it.

And the other significant thing you better make sure of is that the fish you choose is a mid-water dweller. Because while betta fish is fond of staying at the top, algae eaters prefer to stay at the bottom. So, a middle dweller will work much better with these two fish types.

Can Betta and Algae Eater Kill Each Other?

Well, the algae eater is not even a sport to the betta. So, if there is anyone with a possibility of killing the other, that would be the betta. As already said and well-known, bettas are aggressive and brutal. They might not show aggression as long as the other fishes aren’t crossing the line.

Whenever the algae eaters tend to enter the territory of the betta fish, the aggression pops out and the betta tends to attack it. Many times, when there are more than one betta and a combination of both female and male bettas prevail, the betta gets aggressive when other fishes come near the female bettas.

The betta fish has all the potential to kill an algae eater. But it can be trained to be less aggressive than it is by nature. And the number of algae eaters compared to betta and proper spacing between them can save your algae eaters from facing such atrocity.

What to Do if Your Betta and Algae Eater are Fighting?

If after pairing algae eaters with a betta, you find them out to fight, it is better to take quick actions to separate them. Because there is a high chance of the algae eater losing its life to the betta. Because algae eaters are not as good at fighting as bettas.

However, if you see a betta chasing an algae eater, this might not always be a fight. Sometimes, the fishes do get along and play with each other. Though if the betta seems to nib the fins of the algae eater. That’s when you know it’s a serious matter and requires attention or quick actions.

Many expert aquarists train the fishes to live in their territory. You can try a thin transparent partition between the dwelling area of the two fish types to make them stay within their area and not fight. And later, once they get habituated to living within the area, you can simply remove the partition.

Can Betta Fish and Algae Eater Eat Each Other’s Food?

Yes, the betta fish and algae eaters might eat each other’s food. But the catch here is the preferences. While algae eaters are more fans of algae and phytoplankton as their food, and occasionally eat insects or small dead fish when there aren’t enough algae in the tank, betta fish are into insects and other nutritious food, but they also ingest algae as a complementary food.

So, sometimes, algae eaters might eat the foods of the betta fish and vice versa. But there have hardly been seen any fights among them because of food as the levels of food exchange between them are very minimal.

Yes, in terms of compatibility, female bettas are more suitable for sharing the tank with algae eaters. The female bettas tend to fight less, especially when the algae eaters are male. And so, they remain much more peacefully in their territory compared to that of a male betta fish.

However, female and male betta fish together along with algae eaters in a tank would be the worst scenario. Because many times the male bettas fight the algae eaters for coming close to the female bettas.

Benefits of Having Algae Eater in a Betta Tank

As long as you choose the right algae eater type for a betta tank, it can be really profitable for you. Because the algae eaters would be a great help to keep the tank environment clean. Moreover, combining a few other peaceful mid-water dwellers is a great idea as well. It will help you create a small ecosystem within your betta tank.

What are the Best Algae Eaters to Live with Betta?

Here goes a list of some of the most compatible algae eater types to pair with a betta. Select the best one from these based on their similarity in preference of water conditions and other habits.

Now that you have the answer to the money question, “Can betta fish live with algae eaters?“, it’s time for you to make the right choice. Good luck!