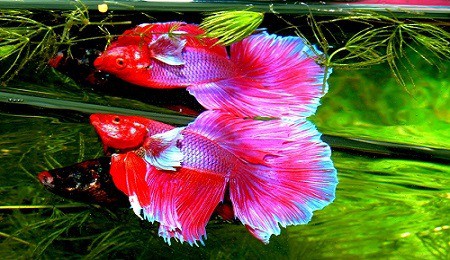 Both Goldfish and betta fish are two of the most popular tank fish out there. Their only competitor for popularity would be the Plecostomus catfish which is also a beautiful fish to own. The two are undoubtedly not only the most popular fish but are also gorgeous and would make for good tank mates – you think? In this piece, we will be highlighting one of the popular questions out there – can betta fish live with goldfish?

Can Betta Fish Live With Goldfish?

The simple answer is no. As much as these guys are beautiful creatures and would be great if you own both, but making them tank mates? That would be a terrible decision. They can’t live happily. To be fair, one of the reasons for this lies with nature and has nothing to do with both of them; for instance, the two requires two different water temperatures. Also, they both reach different sizes, require different decor, diet, different water parameters, and different flow levels – you see why it would be hard to have both as tank mates. If we leave the answer to that it won’t make sense to you, so, not to worry, we will expatiate more on all of these differences to better sharpen your mind.

Size Of Betta Fish and Goldfish

Speaking of sizes, betta fish and goldfish vary in size. Look at it this way, a small goldfish in a tank with a large and territorial (very territorial) betta fish. Looking at it the other way around, a small goldfish will always be a target for a big betta fish. Meanwhile, a bigger goldfish will be seen as a threat. A betta’s body height is often within ½ and ¾ of an inch and their body length is between one to two inches – which is relatively small.

Goldfish, on the other hand, are known to reach an average size of 8 to 12 inches. Body heights differ and vary depending on the species. However, it is usually over half their entire body length. Most times, fancy goldfish are referred to as ‘egg’ goldfish; this is due to their round-edged shape.

Now, goldfish’s most threatening part is its mouth. With a mouth that could reach over half an inch in length and an inch in height; it means they can easily swallow (not chew, basically swallow, which is worse) a betta fish with ease. In this scenario, bettas are defenseless. Think about it; they have no form of defense against a goldfish’s attack. No toxins or spines to defend themselves, so it’s going to be a suicidal act if this happens – pretty much an easy snack for a goldfish.

Temperature For Betta Fish and Goldfish

A goldfish can not stay at a higher temperature. For instance, having a goldfish in water with a temperature of 78 to 82 is tantamount to damaging their immune system. Also, a goldfish’s metabolism would rise in such an environment; this will shorten their life span. They are likely to eat much and excrete more too. When all of these happen, the tank will be filled with lots of wastes which will, in turn, lead to tank pollution.

On the other hand, keeping a betta in a low-temperature environment will result in some adverse effects. This will be worse than keeping a goldfish in the same low-temperature environment. You start to see signs such as inability to swim properly, and extreme lethargy. Remember, bettas need to swim to the surface to breathe in air through their labyrinth. So, if swimming becomes difficult, it could spell doom for the fish.

What you will have is a betta that’s struggling with the fin rot. One of the causal agents of fin rot is the lower circulation of used up oxygen to the tip of their fins. When the circulation rate drops, the end of the fins starts to die – this will ultimately lead to fin rot. Take a look at our other article on fin rot in betta fish.

Whichever the way it is, bettas need clean water while goldfish thrive in dirtiness. Don’t be fooled by the name, goldfish are very dirty. Putting a betta in the same tank with goldfish will spell doom for both of them. Having a goldfish as a tankmate will increase the chances of Ammonia increase in the tank. Even though bettas seem tough, they are susceptible to such things.

It’s not just the ammonia poisoning you need to be worried about; bettas need to stay in a clean environment all the time, you can’t have a goldfish that readily pollutes the water in a tank that has a betta fish. Especially as it will be difficult to clean the tank. When water management becomes problematic, your betta will bear the brunt. If you are still wondering “can betta fish live with goldfish”, I think its betta you put such an idea away.

Diet Of Betta Fish And Goldfish

Even though bettas and goldfish eat what it is they come across, they both have different diets. You don’t want your bettas eating food meant for the goldfish and vice versa. This makes feeding them in the same tank very difficult and an impossible task.

Interestingly, goldfish don’t have stomachs, so, they eat a lot and digest little. You don’t want your betta going after the goldfish waste all in the name of feeding. This also applies to goldfish too as they tend to root the tank’s base for food, this means there is every likelihood that it might end up eating the betta’s poop.

Figuring out a way to make it work and preventing the two from feeding off their waste is slightly impossible, but the best thing to do is that you should separate both and never make them hosts/guests. You might feel like it’s possible to train them to feed properly, even if at first that seems to be effective, trust me, it won’t last.

Décor For Bettas and Goldfish

Just as they are both different when it comes to temperatures and sizes, they also need different décors. Having different preferences, bettas love tanks that are filled with plants, as it provides them with the perfect spot to hide and rest. They feel more protected and comfortable when they are placed in a tank that has lots of plants and tree-like decors. Bettas need to rest and they do that close to the top of the tank. You can provide comfort and a resting spot for your betta by just adding plants to the tank.

What about goldfish? Goldfish prefer a tank that has lots of space with fewer decors. They aren’t the best swimmers, similar to bettas, they are selectively bred. They easily lose their fins and crash into the decorations as they make a ‘wobbly’ motion when they swim.

Rather than trying to make the two live in perfect harmony which is impossible, you can try out these alternatives. Bettas and Endlers Livebearers, Redtail Sharks and Bettas, Male Bettas and female bettas, dwarf crayfish and bettas. These are some of the alternatives you should try. Obviously, these alternatives are just for the betta breeders and not for goldfish breeders.

This piece has helped to answer one of the most important questions asked by betta and goldfish breeders – “can betta fish live with goldfish?” it’s better you don’t find out the cons of having them live together first hand. That was why we came up with this article, to help you answer that perfectly. Feel free to drop your comment in the comment section below.