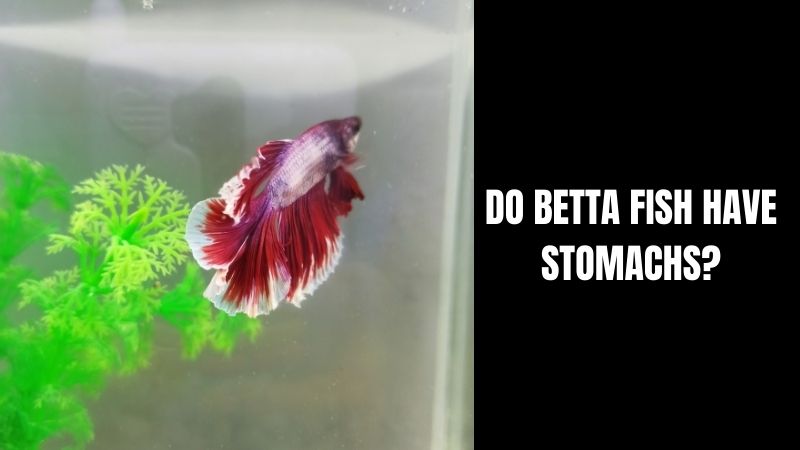 “Do Betta fish have stomachs? Where is it? ” Have you ever come across questions like this? There is a lot of talk about this popular pet and its digestive health, but which of them are true? If you are concerned about whether your betta even has a stomach, then you’re about to find out today!

Betta fishes have stomachs. However, as it is not a true acidic stomach so the Siamese fighting fishes cannot digest many things. The stomach is very small in size, close to the size of its eyeball. That needs to be taken into consideration when feeding bettas.

Even with that question answered, there are several other concerns related to bettas.  “How much food can a betta eat? Why do some bettas have big bellies” – the list of queries is neverending. Lucky for you, you will find all the answers in this article.

Do Bettas Have Stomach?

The answer to this question is rather obvious. Yes, your Betta fish has a stomach and it feeds on a wide range of food too. However, like many other species of fish, betta fishes do not have an acidic or “true” stomach.

This may make it difficult to process many carbohydrates such as fiber, animal-based protein, or other carnivore diets. Perhaps, this is why there is often so much confusion regarding the nutrition and digestive health of bettas.

Where is the Betta Fish Stomach?

More specifically, a betta fish stomach can be spotted directly under and behind its head. To identify, look at your graceful Siamese fighting fish carefully. Look at its face and then look directly below the betta’s face. The stomach is located right below the betta fish’s face and slightly behind its gills.

How Big is a Betta Fish Stomach?

Wondering what size a betta stomach would be? It is quite obvious that these tiny species have rather small stomachs too. The betta fish has a belly close to the size of one of its eyeballs.

Even though sometimes the stomach might look bigger after a hearty meal, it is generally small. There is only so much their tiny non-acidic stomach can process, so it is important to be careful about what you feed your betta fish.

How Much Food Do Betta Fish Need?

Understandably, the small stomach size affects how much food a betta can eat and process. A betta should be fed according to its stomach size, which is only as big as its eyeball. It is recommended to offer small and varied meals to bettas.

Considering the stomach size, overfeeding is advised against. Overfeeding not only makes bettas uncomfortable but can also lead to various health concerns such as swim bladder disorder.

So, how much food does your betta need? Generally, a full-grown betta fish can eat around two to three pellets or three to four bloodworms at a time. Bettas are tropical fishes that should be fed at least two times each day.

Bettas typically follow an omnivore diet consisting of plant and animal-based protein food with limited dietary fiber. You can also provide supplemental snacks such as dried diets, vegetables, fresh proteins, frozen diets, etc. once or twice per week. Note that expert owners often recommend starving bettas once a week to digestion and reduce health concerns such as bloating and constipation.

Why Does My Betta Fish Have a Big Belly?

The normal size of a betta stomach is as small as its eyeball. If you have noticed a more prominent big belly on your betta, it might be concerning. Don’t worry, a big betta fish belly is not always bad news. Below are some of the most common reasons your betta may have a bigger belly than it is supposed to.

A betta fish that is eating more than required will have a constant big belly. If you are feeding the fish more than required or more frequently than recommended, then the fish will have a bloated stomach. This can also lead to a lot of different health issues like gastrointestinal problems. If you are not sure how much to feed your betta fish, assess the fish’s body condition before making a plan.

Ideally, the normal shape of a betta stomach is round. However, a bloated betta fish will look like it swallowed a marble. If your betta has a big belly, it might mean it is bloated. There are several common signs that a fish is bloated and constipated.

Most common symptoms include lack of appetite, lethargy, side swimming, and floating or sinking. Moreover, a bloated betta will not have regular bowel movements. Prolonged bloating and constipation clog the duct and can lead to secondary problems like swim bladder problems.

Pregnancy is another reason why your betta fish may have a bigger belly than normal. If your betta is female and full of eggs, she will have a large belly. Most females have a buildup of eggs when they are preparing to lay eggs and mate with males. The eggs result in an enlarged belly, which is very normal.

Pregnancy and bloating on betta fishes look quite similar. To confirm whether your fish is pregnant or bloated you need to check first whether the fish is a female. Female bettas have white vertical stripes. Plus, you will notice a little white dot or tube on the belly through which eggs are released.

Your betta might have a bigger belly because of a tumor. Even though this is rare, it happens. In the case of a tumor, the bloating is due to a visibly bulging tumor. Unfortunately, tumors in Betta fish usually have fatal outcomes. Sooner or later, a betta fish with a tumor in its belly will die.

How to Fix and Prevent Betta Fish Stomach Bloating?

Thankfully, stomach bloating is a treatable condition if caught early. Fast your betta fish for two to three days until bloating reduces or you notice defecation, then adjust the fish’s diet accordingly. Focus on shrimp or fish meal pellets and avoid giving foods with fillers. Soak the food for 10 minutes in tank water before feeding.

Change the water regularly and add one teaspoon of Epsom salt per gallon of tank water. Repeat this until the fish is asymptomatic but not more than 10 days.

You could steer clear of all of these hassles if you simply avoid overfeeding your fish in the first place. Keeping the water clean by changing it regularly is also quite important for a betta to thrive. Moreover, removing any uneaten food after feeding will help prevent bloating and constipation.

Even though bettas have stomachs, the organ is petite and delicate. It is important to take note of what a betta fish can be fed and how much it can eat. Betta fishes are omnivores that eat limited dietary fiber. Overfeeding can lead to a hoard of health concerns such as bloating and constipation. When identified early, these are reversible problems but it is best to avoid them altogether by taking preventive measures.