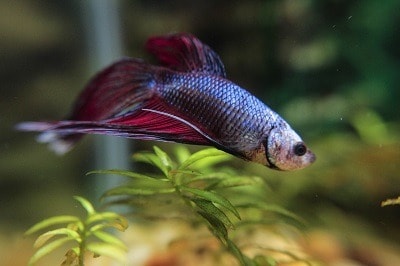 Asides the complexity in the dynamism behind the inhabitation of the male and female betta fish, what else is worth knowing about your betta fish? Well, there are lots of other questions that need to be answered, one of which is the one that is been discussed in this piece. As a new betta fish owner, the thought of a sleeping betta fish might have crossed your mind at some point. So, do betta fish sleep? In this piece, we will be discussing in detail, the facts that surround this phenomenon, and every other thing that’s worth discussing.

So, do betta fish sleep? Yes, they do! Just like humans, bettas also need to sleep. But how they sleep is a bit different. Humans are known to be either a heavy sleeper or a light sleeper. However, bettas are known to be a light sleeper. The reason behind betta being light sleepers is not farfetched, this has to do with their natural survival instinct. Imagine bettas been heavy sleepers. In a body of water filled with larger predators, bettas will be snacks for predators every day. Also, bettas are territorials, not wanting to be chased out of their territory, they sleep light to stay conscious in case of a sudden threat. You can ‘catch them in the act’ if you look long enough. You will notice there are times when your water pet becomes motionless. The entire part of the betta fish stays motionless when they sleep, apart from the gills. When you notice all of these, then it means your betta fish is asleep.

Apart from being one of the most intelligent and interactive species of fish, unlike the scenery of a school of fish with choreographed movements. Bettas are loners, they don’t live by doing the exact thing others do. They are unique and interestingly, aren’t bound by any of these rules. All of these have subconsciously helped shape their personality. A profile that has made them one of the sorted after water pets out there.

You can buy a sleeping bed for your betta fish from Amazon!

One of the ‘surest’ ways to know your betta is asleep is when they become motionless. But, one factor that plays a major role is the time of the day. When they are motionless at night, it simply means that he’s taking a nap. This also happens during the day.  If the body stays motionless while the gills are active, coupled with breathing in and out, it means your betta fish is asleep. Some betta owners also claim that the fish loses some of his colors when he’s asleep, there isn’t a proof to that claim. But you can always keep an eye out for that. However, as funny as this sounds, don’t look at their eyes to catch them sleeping, bettas don’t have eyelids, just like most (if not all fishes). So, whether or not, they are asleep, bettas will always open their eyes.

How To Tell If Your Betta Fish Is Asleep?

Reiteratively, when your betta stays motionless for a very long time in the tank, then there’s a high probability that your fish is asleep. Especially when this happens during the night. but do they sleep on their sides? Basically, when this happens, a lot of new better owners feel terrified, because they usually think that the fish is dead or sick. Well, bettas do sleep on their side. You can check closely to be sure, but more often than not when this happens, its because he (your betta fish) is asleep. But, when he stays that way for a very long time, it could mean something else, something bad. It could be a sign of illness or in some cases, death.

But there’s a caveat to this, bettas are known to lay on their sides when they sleep at the bottom of the tank. Not just that, they are also known to sleep under leaves, between rock, or anywhere else that feels comfy. They may also remain motionless for a very long time.

When Do Betta Fish Sleep?

Next to what and how is when they sleep. So, what time does this usually happen the most? Betta fish sleep during the night and take naps during the day. If you want your fish to get into better sleeping patterns, you should turn off the light when its nighttime. Turning your light off during the night helps your fish get into a proper sleeping pattern. This way, your fish will be able to distinguish between daytime and nighttime. Just like humans, bettas hardly fall asleep when the light is on. Some of the other things to avoid during this period is poking at your betta and or tapping on the glass.

Is Your Betta Asleep?

Even though you’ve been given the signs to look out for when he is asleep, it is also better to always check on your fish in case it starts to act weird. You can check on it at night before you go to bed, or while you are awake in the middle of the night. When you do this often, you will be able to spot the difference in the patterns. You will be able to know if he is sleeping or signs of old age or illness. When you notice your betta is motionless during the day, the gill movement is a tell – sign that it’s still alive. But in a situation where all the parts of the fish remain motionless ‘including’ the gills, then it means your betta is dead. But, before jumping to a conclusion, open your tank and take it ours with a fishnet. Check for signs of wounds or illness. Sometimes, when they get sick, you’ll hardly see them moving.

So, how do you ensure your betta sleeps well? there are certain things you could do to help your betta have a nice nap. When your betta rests well, it usually makes for a happier betta fish. One of the best gifts you can give your betta fish is long hours of darkness.

If you won’t be able to keep up with this (turning the lights off), you should get an aquarium timer, with the timer will help turn on your tank lights off at night then turning it back on during the daytime. When they are having their nap during the daytime, they prefer shady spots. How do you create shady spots for your betta? Firstly, when setting up your tank, always choose a shady spot. Wherever you decide to put it, make sure it is not exposed to direct sunlight. Get floating plants, you could also get tall plants in case you can’t get floating plants. But, make sure the plants you’ve selected are not toxic or harmful to bettas. With these plants, you will be able to block out sunlight. Install decorations in their tank; from bridges, caves to tunnels, these decorations will help create the shady spots your betta fish needs.

4 Reasons Why Your Betta Fish Sleeps Too Much:

What hits your mind when you think of excess sleep? Boredom! When your tanks have no decorations and are small in size, then there is nothing to do but to sleep off. Some of the things you should consider asides shady spots are the size of your tank and toys. You can install toys including a betta mirror. Doing all of these will help optimize your betta fish’s sleeping pattern. So, why he is not asleep, he gets to do something fun. We recommend changing the décor regularly to give your betta something else to do.

Yes, we pointed out the fact that bettas sleep less during the daytime. The goal is not to let your fish sleep all the time. Your main objective is to optimize their routines and sleep when they should. So, your betta should get 9 to 12 hours of light daily.

When there is a feeling of extreme temperature in the tank, it’s not healthy for your betta. Bettas are known to thrive in water temperature that’s between 78 to 82degree Fahrenheit. Anything outside this range will make your betta weak and sleepy. Check the water temperature of your betta tank regularly. Also, make sure the thermometer is accurate.

Just like humans, when bettas are ill, they sleep a lot. One of the reasons why your betta may be sleeping a lot more than he should be because he is sick. What are some of the common illnesses in bettas?

Old age. Yes! Old age may be the cause of your betta’s unusual sleeping pattern. A betta’s lifespan ranges from 3 to 5 years. In the later part of their life, they slow down due to old age, and when this happens, they tend to sleep more. This is an inevitable thing. Unfortunately, there is nothing you can do about it. This is sad, but you should actually give yourself a thumbs up for keeping your betta alive up to that point. Prepare for the inevitable.

Where Do Bettas Sleep?

Basically, bettas sleep anywhere in the tank, but they prefer shady spots just as we’ve highlighted earlier. But;

Bettas do sleep on the bottom part of the tank. This happening is not a problem. But you’ve got to watch out, as this could be a sign of something bad. When you find your betta sleep at the bottom of the tank, you should check the filter. When the filter current is strong, your betta tends to stay off the grid in order not to be tossed around by the current of the filter. You should adjust it as soon as possible.

Why Your Betta Isn’t Sleeping At All?

The final question we’d love to deal with is the issue of bettas not sleeping at all. If you own betta that doesn’t sleep a lot, then it could because of the tank’s brightness. If you leave the lights on for hours (

more than the recommended hours) then, your betta won’t be able to sleep. Finally, if your betta has a tank mate, chances are, your betta will lose his sleep. Bettas can be quite territorial, having a tank mate isn’t going to help.