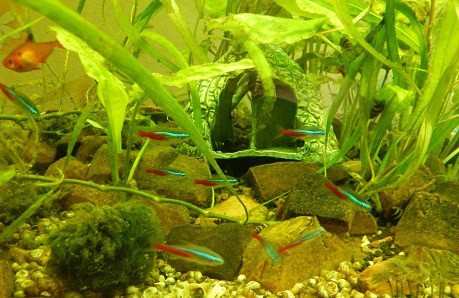 A fish tank adds beauty to your home décor. Colorful lightings, rich flora, and fauna in the backdrop, with red, golden, and blue creatures flapping their tails away in their own peaceful world, is surely a pleasure to watch!

A fish tank needs a lot of maintenance though. Water should be changed regularly, and adequate lighting and oxygen supply must be maintained, or else algae will start building their territory inside the tank.

Algae in a fish tank could be either good or bad. Controlled algae population could be beneficial in the sense that they help maintain a balance in the level of ammonia and other poisonous byproducts from your fish and plants. But overgrowth of algae indicates that the fish tank has been highly neglected.

An algae-infested fish tank needs immediate care if you want to keep your fish and plants alive. This article will inform you about the diversity of aquarium algae, their causes of growth, and how to get rid of them from the fish tank naturally.

Types Of Algae And Causes Of Growth

In order to get rid of algae in your fish tank naturally, you need to first identify them from other debris and also know the reasons behind their growth.

Also known as diatoms, they appear as patches on the surface of the aquarium, and if left unchecked, grow into think brown sheets or coats on the substrates.

Causes of growth: They are basically harmless and grow in new tanks mostly. They grow due to excess presence of minerals like silicates and nitrates. Other causes include less light availability and low oxygen levels.

They are photosynthetic bacteria—some grow as filaments, while others in colonies. It grows quickly and may cover the substrate resembling a green carpet. They are also very slimy and smelly.

Causes of growth: Abundance of nitrates and phosphates cause overgrowth of these bacteria. Additionally, over-feeding the fish and not changing the water regularly, largely contribute to this problem.

Scientifically known as Audouinella, this aquarium algae type at first looks like black spots, later growing into fuzzy tufts, resembling a beard or a brush-like appearance, thus the name.

Causes of growth: Aquariums with excessive plants may promote the growth of black beard algae. Overfeeding and lack of regular cleaning are other very common reasons. Lack of free carbon dioxide in fish tanks may also contribute to the problem.

This type of algae resembles spun sugar or hair-knots. They can also float around as isolated strands. They could be yellowish-green or dark-green in color—with an occasional blue iridescence.

Causes of growth: Excess of iron and long exposures to light cause their overgrowth. Overfeeding is another reason, because an excess of uneaten food in the water leads to their decomposition, releasing nitrates and phosphates.

Staghorn Algae appear to be filamentous and furry, and their filaments resemble deer’s antlers, thus attaining the name. They are grey in color mostly but could be green as well. They grow on surfaces and on the margins of leaves and quite difficult to remove manually.

Causes of growth: If iron fertilizer has been used excessively, there is a high chance of such algae appearing in your fish tank. Unused iron and other trace elements result in an overgrowth of Staghorn algae.

They are also known as spot or glass algae. They look like a layer of loose dust on the glass surface but cannot be removed by simply wiping off. As soon as you remove them, their particles swim and settle some other place and regrow.

Causes of growth: They appear when some drastic change has been made in the light intensity or aqua biome. Their infestation can also occur when there is a peak in nitrogen due to presence of urea or magnesium nitrate.

They appear as spots or crusts and are dark green in color. They look really easy to remove but are not so as they stick quite stubbornly to surfaces.

Causes of growth: GSA thrives in brightly lit conditions, so you would need to control the hours of lighting in your aquarium in a systematic way to get rid of them. Imbalance in phosphate nutrients is another reason for its overgrowth.

How To Get Rid Of Algae In Fish Tank Naturally

Let’s learn a few ways of how to get rid of algae in the fish tank naturally:

This is crucial to develop a well-balanced ecosystem inside your tank. Too much or too little of either will disrupt the natural balance, resulting in an overgrowth of algae.

There is a black-out method to control excessive algae population which can be carried out as follows: Switch off all lights of the fish tank and change 50% of the water. After that, leave the tanks dark for 96 hours. During this black-out, turn off CO2 supply and feeding.

After the black-out period is over, switch the lights back on and again change 50% water. Repeat if algae remain. This method is quite effective against blue-green and spot algae.

Tanks should be exposed to light for 6-9 hours, as more than that encourages algae growth. Hours of exposure vary depending on the light intensity, which can be measured with a light calculator.

Another very important thing which many overlook is that fish tanks should not be exposed to direct sunlight for more than 30 minutes.

Avoid overfeeding and accidental double doses of nutrients. Feeding 2 times a day is enough. Fish food that is low in phosphates should be used.

Excess of iron can cause algae to thrive. Tap water high in phosphates and silicates should be avoided at all costs, and RO water could be used instead. The following chart of nutrients could be followed at the beginning for a new fish tank:

Fertilizers by Aqua Rebell are a good recommendation for daily fertilization.  Iron fertilizers should be added once per week.

This is critical but often overlooked. Equipments inside the tank should be bleached from time to time. Dirty gravel should be regularly vacuumed. Siphons could be used to vacuum gravel, and sponges can be used to remove algae from fish tank glass.

An effective way to get rid of blue-green and red algae in freshwater fish tank, including diatoms and spot algae, is to use acrylic-safe or glass-safe scraper. Metal or plastic-bladed algae cleaners can also be used for removing spot algae.

Water surface algae can be scooped or skimmed off using nets. To eliminate staghorn algae, physical removal would be necessary since they are quite stubborn.

In order to remove dust algae, it would be better if you grow them off. Let them thrive for 3-4 weeks because that is how long their life cycle is. After that, they start dying off, become heavy, and fall off from surfaces eventually when you can clean them out.

Avoid wiping or cleaning dust algae during their life cycle, since it will only re-start the cycle allowing fresh algae to form.

Change 10-30% of tank water every week. In case of algae overgrowth, change 50% water per week.

An alternative water change ritual could be as follows: On the 1st day, change 20% water and keep the lights off for 3 days. On the 4th day, turn the lights back on, and change another 10-15% of water. This should remove most of the algae. This process could be repeated if algae infestation persists.

This is a highly popular method for people who are seeking to alleviate algae problems in their aquariums. Carefulness should be maintained though since some species could be territorial.

Otocinclus catfish is effective at reducing a thriving diatom algae population. Please note though that they need super clean water and are good for tanks with quiet inhabitants.

Hillstream Loach cleans diatom algae off flat surfaces and one piece is enough for a 55 gallon aquarium. Kuhli Loaches is another fish that eat food stuck within cracks and crevices.

Rainbow and Redtail Sharks eat uneaten fish food within rock cracks and are suitable for 29 gallons aquarium. Please note, that they are a tad territorial.

Eartheaters are bottom dwellers that eat leftovers, digest, and then excrete byproducts which are good for plants. They are suitable for 55 gallons or bigger-sized aquariums.

It is better to stay away from Chinese Algae Eaters since they get aggressive and territorial as they get older.

Using algae-eating shrimps and snails may not be effective in eliminating blue-green algae, but quite useful against other types.

Adding just 2 or 3 Nerite snails could prove to be quite effective for reducing spot algae and glass-growing algae, but it is worth noting that they lay white eggs, which look like sesame seeds, which might not be preferable to some. Pink Ramshorn Snails love eating soft algae.

Mono-Shrimps feed on hair algae. They meticulously clean nooks and crannies and 3 to 4 of them are enough for a large-sized tank. Cherry Shrimps are preferred by some because they move gravel and feed on fish excrements, thus preventing the growth of algae.

Stay away from Malaysian Trumpet Snails because they eat more leftovers and debris than algae. They are fast breeders and once they have overpopulated, they become quite hard to get rid of.

Apple snails are similar in the sense that they do eat plants and algae, but breed too quickly.

Biological filtration may prove to be an effective natural way to get rid of algae, especially when the infestation is largely due to high ammonia content. Beneficial bacteria are added to algae-infested water tanks, which break down ammonia into less harmful nitrates.

Oxygen-rich water is needed for these bacteria and rocks must be added for bacteria to adhere to. This method works best in combination with other methods of controlling algae.

Aerating or increasing the quantity of oxygen in the tank is another useful way to get rid of excess algae, and this method is highly effective against blue-green algae.

A very easy and organic way of aerating a fish tank is the “Cup Method”. A pitcher or a cup is inserted into the fish tank, some water is collected, then the container is lifted up high, and the content is poured back into the tank.

This will create a splash in the water which will cause movement resulting in aeration. Water from high up collects O2 from the air as it falls.

Fast-growing stem plants are an excellent choice for aquariums. Some plant species which are easy to grow are Java Moss, Crypt Wendtii, Cryptocorynes, Java Fern, Anubias and Pygmy Chain Sword. They are low maintenance and cost-effective.

When it comes to fish tanks, we should avoid certain practices like overfeeding, maintaining excessively dimly-lit or brightly-lit tank interiors, using high-mineral tap water, and not replacing water regularly.

Poor maintenance leads to the overgrowth of algae and bacteria in the water which may prove to be fatal for your fishy friends. By using natural remedies, these problems could be solved.

If you follow our tips properly, we should be able to get rid of algae in fish tank naturally.