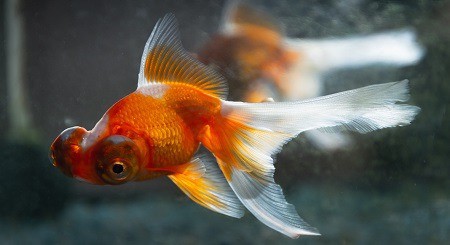 Those beautiful exotic colors paired up with a flamboyancy appearance makes a goldfish the most aesthetic pet you can ever own. People are super fond of bringing that eye-catchiness into their space with the responsibility of a goldfish.

But with that responsibility, you get to go through several phases of knowing more about your darling little pet. One such hard to tell confusion is regarding the gender identity of a goldfish. It’s pretty much impossible for a person with zero ideas on goldfish to determine that. And so, your confusion is legit!

Today’s deep chat is meant to teach you about noting that hard-to-tell gap between a male and female goldfish.

The main concept is regarding how to tell if your goldfish is male or female? We would also discuss some common difficulties that you face while this determining process. Stay Tuned till The End!

Contents show
How to Tell If Your Goldfish is Male or Female?
Pay Attention to Gills, Body & Fins:
Observing the Vent Shape:
Verifying the Body Shape:
What Does Front Fins Look Like?
Through Mating Behaviors:
Difficulties & Limitations of Telling Goldfish Gender
The “Mature Goldfish” Factor.
There’s No “100% Confirmed” Way to Tell.
Unhealthy Fishes Are Even Harder to Identify.
Conclusion

How to Tell If Your Goldfish is Male or Female?

After looking at the confusing difference between male and female goldfish pictures, you still can’t figure out the whole matter. Actually, it’s not that easy and probably very difficult for even experts.

But by confirming more than a few signs you may get close to the right answer. Here are some common indicators or signals that will help you to identify your goldfish’s sex role…

The easiest and straightforward technique to identify a goldfish’s gender is by looking at the gill plates. You need to check for tiny white dots. These are commonly known as breeding stars or tubercles. It’s more like tiny salt grains. Also, they feel pretty rough to touch just like sandpaper.

You will find these on the pectoral or front fins on the front rays. Sometimes these are also visible on scales.

Some people confuse these dots as white spot disease. If you notice the dots are randomly showing up on the body and look larger, it’s probably the ich. But if you notice neat rows on scales, these are simply breeding stars.

So, the point is if you find these tiny white dots, then your goldfish is probably a male. Now for 99% of the time, this is confirmed and valid.

However, in extremely rare cases, the female goldfish would have such spots and the reasons are also unknown. And that 1% of doubt is never going to leave the plot when you are using this method, mind it!

Now from the side, if you can notice the fish having round “outie” then it’s probably a female. It is basically a whitish protrusion and also small in size. During the spawning season, it’s commonly noticeable in female goldfish.

On the other hand, a male goldfish has an oblong “innie”. This is pretty longer than the female’s part. Also, it is more intending. The difference is very hard to tell and also confusing.

Another male and female fish difference is about their body shapes. It’s probably even confusing than the vent method.

And that’s because the goldfishes live with different feeding habits. So, when you try this, don’t completely rely on it. You probably want to count other methods as well to get a more accurate result. Another note is that Pearlscale is hardest to identify using this method.

In the abdomen area of a female goldfish, you will notice a shorter and rounder appearance. As they get close to their breeding period, they start getting plump and swell with eggs. And the shape looks like a dumpling.

From the side view, the shape looks pretty deep. This is known as gravid. In some cases, it looks lopsided. This means one side of the body is swollen more.

Sometimes the overly swollen belly can indicate a bacterial infection. So, if you notice the goldfish isn’t pleasantly plump and there could be anything wrong, the chances of illness can be high.

Also, some fishes produce a lot of eggs that get building up in their abdomen. This results in bulging and the fish gets egg-bound.

The male goldfish looks thin and long in the abdomen area. In the belly’s underside area, you can also find a seam or ridge in male goldfishes.

You need to have a look at the shape and length of the front fins. Are they longer and thinner? Then probably it’s a male goldfish. On the other hand, if you notice short front fins and thicker leading rays, it’s a female goldfish.

Now if your goldfish is of long-finned variety, this method can be inappropriate. In a group of mature goldfish that are from the same breed, this technique is usually more effective.

The most obvious method to identify a male goldfish is looking for some mating behaviors in it. This works best during the spawning actions. You may notice one fish pushing another into objects or plants inside the tank. These are the male goldfish.

Female fishes are more likely to keep up with running and getting tired. Some also end up getting torn fins from this rigorous process.

This is a very accurate method of telling about your goldfish’s gender. However, it only works during the breeding season.

Now ensuring goldfish male and female difference is probably very tough for a non-expert owner. These differences usually work only to a certain extent or during a specific period. Let’s talk about some limitations that can fail you in this identification tour.

You can’t just go onto this gender deciding mission anytime you wish. The goldfish has to reach its mature age. There’s a good chance you’ll not be able to get accurate results otherwise. Usually, a goldfish needs at least one year to reach that mature phase.

Also, this maturation rate is different from one fish to another because of the difference in species and sex. Some are able to get matured at 9 months’ age. While female fishes may need more than three years.

So, you see, without any DNA analysis, it’s quite close to impossible. However, your chances of having both male and female fish can be increased in one way. Get at least six healthy fish of similar variety. 98% of odds will be on your favor this way that at least one of these fishes is going to be different in gender.

Only the spawning process observation is what confirms accurate identification. Other than that, there’s no foolproof way of identifying gender. Even with experts. Understand That!

This process is very hard and complicated. Since there are breeds of goldfish that don’t follow those general rules. One good example is the Ranchu or Ryukin breed. These are habitually pretty round and thick in body shape, both men and women variety.

And so, it’s practically impossible to apply the above rules to identify such breed’s gender.

Unhealthy Fishes Are Even Harder to Identify.

Another bad news is for those owners who are not quite sure about their goldfish’s health conditions. Are they pleasantly healthy or having trouble you are yet not sure about? This has a direct connection to all those gender identifying tests.

This is because an unhealthy goldfish won’t really have regular spawning behavior, well at least in most cases. Some may also lack the general physical characteristics that indicate gender.

And so, it’s important that the goldfish you are willing to know the gender of is living healthy. Usually, goldfishes that are fed well and maintained inside clean water tanks are expected to be healthier.

Because of poor feeding, you may mistake a thin female goldfish to be male. And the same can happen with an internal bacterial infection suffered male goldfish that is swollen. You believe it’s a female fish when the truth is, it’s just an ill male goldfish with a distended abdomen.

And that was all about how to tell if your goldfish is male or female? You see, there’s no one sign that you should solely trust to identify your goldfish’s gender.

The smartest click here is to use multiple signs and then guess the gender. That way you will be furthest away from making a mistake.

Taking interest in knowing your goldfish’s gender is important. This can prevent accidental breeding and keep events inside that tank according to plan. Another funny reason is you won’t call your male goldfish Marry or Jessica. It’ll have a proper male name!