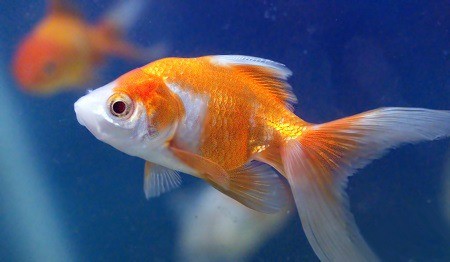 Goldfish is the ultimate choice for any beginner fish pet owners. This beautiful vivid colored species will add great contrast to the tank. Starting from the aquarium to the pond of your backyard, goldfish can grow pretty well. But how big do goldfish grow? Well, in this article we will shed some light on the growth of different types of goldfish.

There is a myth about goldfish that they cannot grow much more spacious, which is wrong. A commonly bred goldfish can grow pretty long. It is the small tank condition and low quality of water that mainly prevents the goldfish from increasing.

If taken enough care, a typically breed goldfish can grow up to 45 cm long, which is not at all in the small category among the tank fishes. There are different types of goldfish breeds. The other breed has a different growth pattern. Here we have made two main sections of goldfish, slim bodied breeds and fancy breed. Under these two sections, we have mentioned the widely popular goldfish that you might know about.

This particular breed of goldfish is strong, fast, and athletic. They can also grow quite large, being the giant goldfish. People who plan to grow goldfish in the pond, they mainly go for this slim bodied breed. They can grow about 12 to 14 inches and weight around 3 pounds. There are also several types of tiny bodied goldfish.

If you have seen only a single type of goldfish in your life, the chances are high that you have seen a common goldfish. This is the most underrated goldfish and widely available.

Most of the fish keepers have had this as their pet. They are also known as feeder fish. In terms of survival, they are pretty good. They can survive the harsh condition where a fancy breed will not last a week.

Another widely popular type of goldfish is Comet. They are quite like the common ones. The only difference is their tailor caudal. They have a much larger and flowier tail than the common ones.

Comets are mainly originated in the US. They are of different colors, yellow, orange, red, and white. A special type of Comet is Sarissa, which has a dark red upper part with the white lower part.

This breed of goldfish can live in a tank or in the pond. They grow pretty well, like the commons. An average Comet can grow 12 to 14 inches long and can live up to 14 years.

Shubunkins are exclusive for their vivid coloration and pattern. They are also known as “Calico fish.” They come in a wide range of color patterns, including gold, black, red, yellow, and orange.

There are mainly three types of these, the London Shubunkin with shortfin, the Bristol Shubunkin that has a lobe-shaped like “B,” and the American shubunkins with more giant tails.

Shubunkins can live both in the aquarium or pond. With better water conditions and tank size, they can grow 14 to 18 inches long.

There can be a debate on whether this Wakin is a fancy breed or a normal one. They have a fancy like a fin, which technically makes them fancy goldfish. But for their long deep body, they are known as a common breed.

The Wakins are not very efficient swimmers. So they are mainly preferred to be kept in the pond. On average, they can grow a foot long.

Like the Wakin, the Jikin has a deep body with a fancy tail design. The thing that distinguishes them from the Wakins is their color. It is red, and many call it “12 Red”.

The Jilin has an artistic color combination. It is basically white with red lips, fins, and gill plates. These goldfish can grow up to 10 inches if taken enough care.

Well, we cannot deny the fact that we all love exceptional when it comes to pets. The fancy breed goldfish has precisely that; they are sometimes eye-catching, either for their mesmerizing appearance or the bizarre outlook.

However, they are not as much thriving as normal ones. Being modified makes them delicate. They have this tiny egg shape with beautiful flowing tails that attracts everyone.

Fantails are the most common fancy goldfish out there. They are considered as the European version of the other fancy breed, Ryukins.

They have long multiple lobes in their tails, which is shaped like a fan. Basically, that makes them the “Fantails.” Fantails can survive in the pond even. They are the hardiest of the fancy breeds. On average, they can grow 6 to 8 inches.

The eastern version of the fantails is the Ryukins. They are also quite popular among the fancy breeds.

Lukins has a different shape than other fancies. With a pointier head and big hump, they are quite deep in size. I tell you, they can get really tall, even longer than their length.

You can find both short-tailed and long-tailed Ryukins out there. They are also hardy enough and can cope up well with lower temperature water. Most Ryukins can grow up to 8 to 9 inches in length.

With a strange shape, the pearl scale goldfish is considered a weird fancy breed. They are specially bred for round scale. The body is like a yellow-orange, or it can even remind you of a golf ball.

The pearl scales are not the hardiest of their kind. In fact, they need proper care and can grow 6 to 8 inches.

The bubble eyes are named appropriately for their water-filled sacs under the eyes. It makes them one of the strange-eyed goldfish. The sacs under their eye can grow with them and can take an impressive size.

The bubbles make them a very fragile species. In fact, you need to take special care for them like removing anything that can damage the bubbles from the tank, maintaining water quality, etc. They do not get that big. An average bubble eye can grow 6 inches.

Another fancy breed with distinctive eyes is the Telescope goldfish. Unlike the bubble goldfish, they have smaller yet remarkable eyes.

The telescope eyes have different names like Popeye, dragon eye, etc. They also need to be taken care of, especially with that big attractive eyes. An average telescope eye goldfish can grow 8 inches.

The Butterfly goldfish has horizontally spread shape. They look like a butterfly, hence the name. Butterflies are mainly bred to be examined from above because of their overall shape. But you can also enjoy seeing them in the aquarium.

Butterfly goldfish are mainly red, white, and calico colored. They can grow 6 to 8 inches long.

Orandas are a popular fancy breed. They have a strangely shaped tail that grows tall and wide. Some people often call them “Brain fish” for their shape.

They hold the record of being the longest goldfish, 16 inches. But they usually grow somewhere from 10 to 12 inches.

This breed is almost similar to the Oranda goldfish. With a bump on its head, its head appears like the mane of a lion.

Lionhead has an egg-shaped, round like body. They do not have any dorsal fin, and the tails are fancy looking. Lionhead goldfish need ample space to live happily. Generally, they can grow from 6 to 8 inches.

Another fancy breed goldfish is the Ranchu. They are round-shaped like the Lionhead. With white, black, red, yellow, and orange colorways, they look pretty gorgeous.

The Ranchus are known as intelligent fish. They are also considered very sociable and have a sufficient interest in people.

It is recommended to keep Ranchus in the pond, because of their bigger size. They can grow pretty long, from 12 to 14 inches.

Many believe goldfish can not grow much longer. But this is not exactly true. They have some factors, and if taken enough care, they can thrive well. The factors behind the growth of goldfish are

Goldfish need space to grow. Overcrowded tanks stress the goldfish. So, a goldfish needs at least 30 gallons to live well. Adding one goldfish should include adding 10 gallons with the previous volume.

There is a myth that goldfish are happy in a small bowl. Wrong! Give it enough space, and it will flourish.

To maintain the growth of your goldfish, nutrition plays an important role. How fast can goldfish grow? It depends on the food they are getting. At an early age, you should ensure enough protein for your goldfish.

As it grows, add vegetables and live foods in their diet. Remember, a goldfish is an eating machine. So make sure it does not stay unfed. But that also does not mean overfeeding your goldfish. Quality is better than quantity.

Goldfish are cold-water species. They stay well in much colder water than other aquarium fish. The ideal temperature for your goldfish should be 71 to 75 degrees Fahrenheit.

Also, make sure your goldfish are not freezing in winter. It is recommended to take them inside in winter if you are keeping them in the pond.

Goldfish are quite messy. A decent filtration system is mandatory to keep the water elements balanced. So it is better to change the water once in a week if you’re keeping them in the tank.

Goldfish are one of the most popular, adorable choices for the fish owners. But they are often misjudged. Myths regarding their smaller size and less growth are not right. They only stay short because of the unhealthy water condition or smaller tank size.

If taken enough care, the goldfish can grow pretty large. But for that, you need to maintain water quality, nutrition, tank size, and water temperature.

As we have talked about how big can goldfish grow, now you need to deny the myths and start taking good care of your goldfish. Who knows! It might just make the world record of the most giant goldfish!