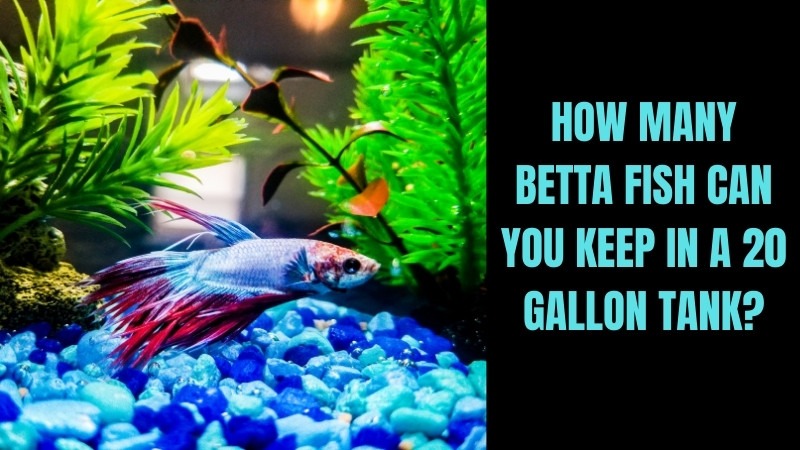 One of the prettiest aquarium fishes with skirty, colorful, and fancy fins, the betta is a popular choice for most fish owners. However, bettas have some strict restrictions as a pet that are required to be fulfilled in order to own them. So, if you have a big 20-gallon tank with several other fishes in it and wish to include betta too, you might want to give it a second thought.

Though the challenge doesn’t end with knowing how many betta fish can live in a 20-gallon tank. Because no matter how many bettas you keep within the tank and how big the tank is, keeping several bettas together is always a risky move. But with the proper measures, you can always deal with it. Keep reading to know more about keeping bettas together in a 20-gallon tank.

Can a Betta Fish Live in a 20 Gallon Tank?

Because the betta fish grows according to the size of the tank. But if the tank is too big, the betta will stop growing after 3 inches. So, a fish of 3 inches in a huge 20 gallon tank will not be as eye-catching as would have been in a smaller tank. And so, if you want to keep a single betta in your tank, a smaller size tank would be an ideal choice to showcase its beauty properly.

Is a 20 Gallon Tank Too Big for a Betta?

A 20 gallon tank might not be the ideal choice for a betta, but by maintaining the proper water parameters, a betta can live in it. A betta usually loves swimming restlessly on the top of the tank.

Many times, if the tank is too big or tall, maintaining a proper supply of oxygen might get difficult. An inconsistent oxygen level will create issues within your betta. Also, another problem you can face after placing a single betta in a tank as big as 20 gallons is that they will get less access to their food since the food particles will get more diluted and less concentrated in the water.

And so, if you are planning to keep a betta in a 20 gallon tank, it is better to get some tankmates to share the tank with it. But make sure the bettas are not aggressive to the species you’re keeping them with.

How Big Can a Betta Fish Get?

The size of the betta is completely dependent on the size of the tank. A betta kept in a tank smaller than 5 gallons might not even grow up to 2 inches. However, a betta living in a 5 to 10 gallons tank usually grows up to 2.5 inches.

Though the ideal size of a betta is considered to be 2.5 inches, many bettas living in large tanks with more swimming space grow up to 3 inches. But usually, bettas don’t seem to grow more than 3 inches no matter how large the tank is. That’s the maximum limit for their growth.

Can I Put More than One Betta Together in a Tank?

Betta is a very territorial fish. They are quite aggressive to their own kind. Usually, bettas of the same gender fight within the tank and many times are responsible for killing each other. However, bettas of the opposite gender usually live comparatively peacefully inside the tank.

And so, it is better to combine both male and female bettas to live together in a 20 gallons tank than just male or female. Though many times, fish petters train the betta fish to live together in peace inside a big tank. If you’re willing to, you can also train them for a particular period by keeping them in quarantine before you keep them together.

How to Make More than One Betta Fish Live in One Tank?

Fish petters make bettas, especially the males that are aggressive and territorial, live together peacefully in a tank after a prior period of training. This might sound like something tough or professional, but it is much easier to perform.

What they do is they add the bettas in a big tank one at a time and separate them using a transparent plastic or glass divider. In that way, the territories of the fishes are separated and they learn to remain within their territory instead of invading others.

Then, after a month or two, the dividers separating the aggressive fishes are removed and the fish does not seem to cross their territory anymore to fight with one another. This is a quite effective method used by professionals to make bettas live together in a single tank without fighting.

How Many Male Betta Fish Can I Keep in a 20 Gallon Tank?

However, if the tank is as big as 40 gallons, then two male bettas can be kept without any partition. Because in that case, each male betta will have their own territory of 20 gallons that they’ll unlikely cross.

How Many Female Betta Fish in a 20 Gallon Tank?

Unlike male bettas, female bettas aren’t very territorial. They are comparatively docile. But they do get aggressive sometimes when they figure out the hierarchy between each other. And so, betta keepers prefer placing them in a sorority tank to avoid fights taking place among betta females due to hierarchy.

In a 20-gallon sorority tank, about 5 to 7 female bettas can be kept. The chosen bettas usually have the same size and age. It is more preferred for the bettas to be from the same spawn. In that way, all the bettas feel equal and don’t bully each other. The fishes in the sorority tank are placed all at once to avoid aggression towards newcomers.

Moreover, plenty of hiding spaces is preferred in the tank, so that the fishes can choose their own territory and hiding spot to live peacefully in their personal space.

How Many Bettas Can You Keep in a 30 Gallon Tank?

In a 20 gallons tank, if a male betta is placed, placing about five female bettas with it would be an ideal choice.

In a 30 gallons tank, you can keep up to 10 female bettas and 1 male betta fish together. If you want to keep more than one male betta, you must use a tank divider.

What Other Fishes Can Share a 20 Gallon Tank with a Betta Fish?

If you’re giving a thought to combining betta fish with other species in the 20 gallons tank, make sure you keep enough room for betta and choose fish types that are compatible with it. Here’s a list of fish compatible with betta you can choose from.