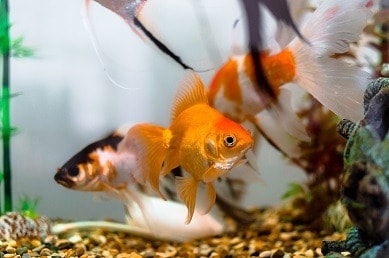 One of the most beautiful creatures of this world is goldfish. There are probably very few people who didn’t keep goldfish as a pet once in their life. So are you are someone who just bought a goldfish or thinking about buying one? Then the widespread query how many goldfish per gallon tank might have come across in your mind at least once.

How Many Goldfish Per Gallon Tank?

The answer to the question is not so simple; this is why you need to know in detail.

To be honest, like a goldfish owner, you should be cautious about the size of the tank.  The tank size is important because the wrong choice of a tank can make your goldfish stunted. When the goldfish becomes stunted, it’s a sign that it will be dead soon.

Goldfish in a small bowl is a common scenario. You might also think about getting a bowl for your goldfish. But do you know even though it looks beautiful in the container, but it is not happy at all. A goldfish can grow up to six to eight inches, so it needs extra space. And if you can’t provide enough space for the goldfish, it becomes stunted.

You do not need a goldfish tank size calculator in real to get the exact measurements. One gallon of water per inch fish is the general rule of calculating the size of the goldfish tank. This simply means when the goldfishes are small, and one inch in size, one gallon of the tank is enough for it. But with time when it will grow, you need to shift it into a larger tank.

Now let’s dive into the details of the larger tanks.

How Many Goldfish in 10 Gallon Tank?

10 to 20-gallon aquariums are considered as the starting tank when keeping goldfish as pets. These tanks are not recommended for long term use. One inch of fish per one gallon is the general rule used to determine the tank size or the number of goldfish to be kept in a tank of a particular size. As per this rule of thumb, two to four small goldfishes can be kept in a 10-gallon tank. It should be remembered that goldfishes grow quicker than other fishes. But they will not get matured and be of proper size unless they are kept in a larger tank. However, if you follow this rule, you have to keep a record of the sizes of the goldfishes regularly. Common goldfish can easily grow up to 10 inches and fancy goldfish usually reach 8 inches in length. Some goldfish have grown even bigger.

Some fish hobbyists recommend putting a single goldfish in a 10-gallon tank so that it can grow up in a proper environment.  So it is better to keep them in a larger tank from the beginning to avoid overload of fish waste, less room for the fish, stress on the fish, polluted water, disease, and death. Usually, tanks smaller than 10 gallons are not used for goldfish due to lack of inadequate room for the fish.

How Many Goldfish in 20 Gallon Tank?

If you want to add fish of other breeds, you have to calculate their size in addition to the goldfish. However, you should be prepared to buy a larger tank as they grow. If you are interested to keep your goldfish healthy and happy, you should follow this another rule of thumb: one goldfish requires at least 20-gallons of water. So that means two healthy goldfish can live healthily and happily in a minimum 40-gallon aquarium.

Here are few Goldfish tank size myths that you should avoid:

Believing is an excellent practice, indeed. But sometimes believing in wrong information regarding your goldfish tank can make responsible for its death. That is why you should be aware of the common myths related to the goldfish tank.

There you go; I have gathered all the necessary information that anyone needs to take into account before buying a water tank for their precious goldfish. I hope now, after reading our piece of writing all your confusions and queries about how many goldfish per gallon of tank is clear. Hope you have a great time in nurturing your goldfish. Thank you!