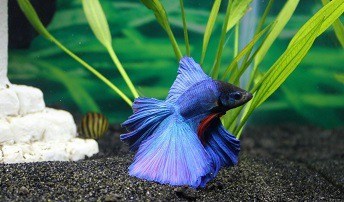 A lot of betta breeders have trouble putting bettas in community tanks. The reason for this is not farfetched, as it’s a known fact that bettas fight. One important thing to consider when it comes to breeding a betta is that they are very territorial. But there are things you can do to keep the peace between a betta and its tankmate. So, why do betta fish fight? There are lots of reasons why bettas fight. Not to worry, we will be highlighting some of the reasons why they do so and what to do to keep the peace.

Whether you just recently started keeping a betta or you’ve owned one for a long time, you’d want to get an answer to the question – why do betta fish fight? Just read on.

As we’ve said earlier, there are tons of reasons behind the fighting nature of betta fish. But just like most things, there is a history behind this phenomenon. A bettas aggressiveness dates back a century. They were first discovered in the southern part of Asia in the 18th century. They were then brought from their wild habitat which is rice puddles and paddies to local cities by field workers.

Interestingly, the locales profited from their aggressive nature by placing bets on their fight. More like betting on the matches. This formed the basis for their increased aggression as locals the bred them for fighting purpose, so, the more aggressive they were, the better. The matches became very popular. So popular that the king of Siam then regulated these matches by taxing the betta keepers. However, even though one may debate the existence of such sport, one can’t argue the fact that the genetic aggression still exists.

Why Do Male Betta Fish Fight Each Other?

Now that we’ve cleared out the history behind their aggressiveness, let’s take a look at why male bettas fight each other. Back in the wild, it’s natural for bettas to spend the wet season in rice paddies and generally in large rivers. However, this doesn’t mean they spend the major part-time exploring the water. Yes, they aren’t great explorers. In fact, a betta’s territory is about 3 ft square wide.

Large rivers and lakes provide the male’s lots of space which in turn means they will have big territorial spaces individually. One of the signs they give to assert their dominance includes spreading their fins and puff their gills. If peradventure two male bettas encounter each other, you’ll see them nipping at each other until one submits to the other – retreats. This usually happens when they search for food. Another reason why bettas fight aside food exploration is to protect their offspring and the entire nest. When a male betta is ready to mate, he creates a bubble nest on the surface of the water. The male betta continues with this response after chasing the female mate away. After laying the eggs and sending the female bettas away, he sees the other bettas as threats to his eggs.

Clearing The Myth “Will Bettas Fight To Death?”

Unlike what you read on the internet and what most writers want you to believe, bettas don’t fight to the death. Bettas won’t fight to the death unless they are selectively bred for that purpose and there is no place for the less dominant betta to hide. This is common with bettas that are sold as pets. Rather than killing their male counterparts in a fight for dominance, the fight would often result in the tails, tails, and gills been damaged.

Do Female Bettas Fight Each Other?

Female bettas are not known to be aggressive. They are less aggressive than their male counterparts. But just because they aren’t aggressive doesn’t mean that they aren’t territorial and won’t back down from a fight easily. Female bettas can live peacefully in groups of female bettas. If a natural pecking order is not established, females will fight in a sorority, but once the order has been established, the aggression will reduce.

For instance, in a big tank that houses 6 female bettas, one will establish herself as the alpha of the group and others will have to submit to her forming smaller packs of their own. But, once a new betta is added to the group, the ecosystem will not only be disrupted, the order will have to be established again and the leader will have to show the newcomer who’s boss. But, if the condition is kept unchanged and the statuesque is maintained, there will be peace in the tank.

If you need to create a sorority of females, it is better a few of them in one group and provide enough space for them. A sorority of female bettas should have at least 3-5 females. It’s best if they have a large habitat – it gives them enough room to explore, play, exercise and feed properly. Provide the group with a safe spot by including plants and hideouts in the tank. Remember, never include a male to the sorority tank – it’s a bad idea.

Yes, they do fight. But why do they do so? Female bettas and male bettas will always fight each other due to the different behaviors they exhibit after laying eggs. The two should never be kept in the same tank. They should only be placed together if and when its time to mate. Female bettas are fond of eating their eggs, now, this is one behavior that the male tends to fight off and that’s the reason why male and female bettas fight. Asides the reproductive reasons, the major reason why female and male bettas fight is for dominance and territory.

Do betta fish fight other fish?

Sure, they do! They are not the type of fish that live peacefully with their tank mates. To be fair, it doesn’t mean they will fight every fish they come across. As long as you are not a bright colored fish that’s the same size as the betta, you are not going to be seen as a threat. Male bettas see bright colored fish as another male in which case a fight is bound to occur. If you have plain looking fish and a lot of hideouts in the tank, then the fish in question will relatively be safe.

How Long Do Betta Fish Fight?

When two male bettas fight, they fan out their fins and puff their gills to create an illusion that they are larger than they are. This is meant to scare off the threat but if this doesn’t work, the two will start to nip at each other until one of them backs down. A betta fish fight tends to last for a few minutes.

Among bettas that have been selectively bred for fighting it usually ends with one of the two dead or very injured. You should never do this in captivity. Encouraging fighting bettas is animal cruelty.

Conditions That Will Warn Bettas Fighting Other Fish:

For a betta to fight another fish, certain patterns and conditions will have to trigger the pet-war. Bettas will fight other types of fish in the same tank if there is not enough space in the tank – enough space to serve as hideouts for the either of them, if the tank is way too small for an efficient community ecosystem, the other fish’s aggression matches the bettas’ aggression, the other fish has bright color, or if the other fish looks like the betta fish.

How To Prevent Fighting Amongst Betta Fish (And Other Fish).

Why do betta fish fight? At this juncture, you already know all you need to know about this strange behavior in bettas. You should never place bettas in tanks that are smaller than 10 – gallons. They need enough space to cohabitate with other types of fish. If you are an inexperienced keeper, you should avoid tank mates for now. Bettas won’t see the other type of fish as a threat if it’s not bright-colored, and more importantly if they don’t cross its part.